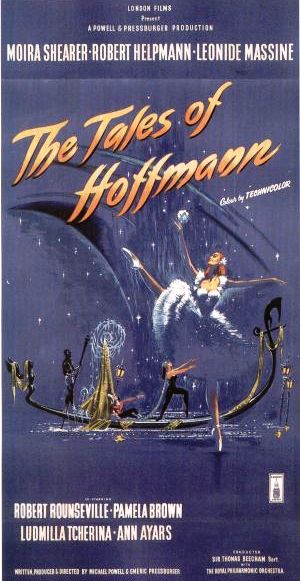 Over the weekend, I watched George Romero’s favorite film, Tales of Hoffman.

Released in 1951, Tales of Hoffman is an operatic re-telling of three romantic misadventures (along with a framing story) of the eighteenth-century poet E.T.A. Hoffman.

Whenever he is interviewed, Romero makes a point to talk about Hoffman and the impression it made on him as a young director.  I was curious to see if I could detect how it might have influenced his zombie films (if at all).

Hoffman is a fantasy, not a horror movie.  I knew that going in.  (But many masters of horror are influenced by fantasy.  H.P. Lovecraft’s favorite writer was Lord Dunsany, for example.)

And it is easy to see where certain elements of the stories in Hoffman may have influenced Romero’s work.  There are cascades of grotesque masks covering everything from walls to beer steins.  There are inanimate bodies (corpses?) decorating many scenes.  (In one memorable sequence, a ballerina dances over the faces of twisted dead bodies.)  One tale is the story of a clockwork dancer who meets her end when she is ripped apart, piece by piece, whilst still “alive.”  (The image of a servant lovingly stroking her disembodied hand is strange and haunting.)

The Criterion Collection edition of Hoffman  also includes an interview with Romero in which he expounds upon the influence of the film in his work, and tells several amusing anecdotes.

Yet, ineluctably, I must report that I found many parts of Hoffman very tedious.  Other parts seemed unintentionally silly.  For example, the actor playing Hoffman looks a lot like Liberace, and never more so than in the below clip at about 1:34:

To be completely honest, I found my mind wandering during much of the film.  (In this and other respects, the experience was rather like attending a religious service.  I felt as though I had been in the presence of something important and ultimately salutary, yes, but was nonetheless deeply relieved when it was over.)

Would a typical zombie fan enjoy this film?   I do not even dare to conjecture!