I’m using this page to archive blurbs and media about my new novel, Zombie, Ohio. 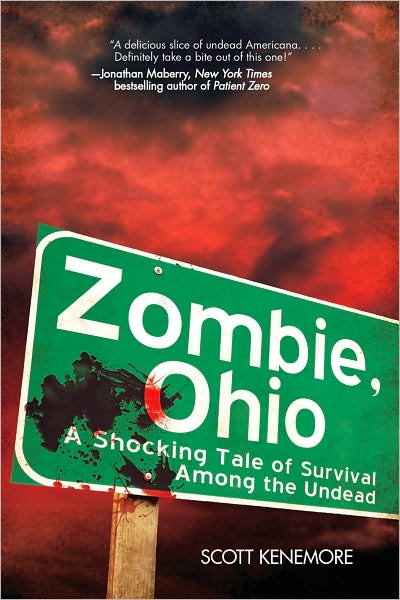 “In page-turning fashion, zombie-Mellor leads readers through a fun and light-spirited romp through a post-apocalyptic Knox County, Ohio. Zombies roam the countryside, and even the Amish are packing heat.” – The Youngstown Vindicator

“Also check out Scott Kenemore’s ‘Zombie, Ohio: A Tale of the Undead.’ Kenemore’s first novel tracks self-aware zombie Peter Mellor as he struggles to deal with his re-animated state, find his non-zombie girlfriend and uncover who killed him. It’s more humor than horror, but ‘Zombie, Ohio’ doesn’t want for good old-fashioned gore.” – The Sacramento Bee

“Kenemore’s book is well worth the read.” – Trembles Magazine

“Zombie, Ohio is a fun, fast and thoroughly enjoyable read, recommended to any zombie fan with a sense of humor.” – Midnite Media

“Kenemore is a truly talented author and has painted us a grimly wonderful post-apocalyptic world.” – Day of the Woman

“. . .a satisfying and entertaining undead adventure—one that has both brains and heart. Fans of zombie tales (everything from the Romero classics to the 2009 zomcom Zombieland) won’t want to miss this one.” – Nights and Weekends

“Kenemore (Z. E. O. and The Zen of Zombie) infuses his debut novel with the perfect mix of horror, gore, humor, and (yes, it must be said) brains . . .Zombie, Ohio is a great bit of zombie-infused fun for both devotees of the genre and for folks desperately seeking an antidote to sparkly vampires and angst lycanthropes ” – Shroud Magazine

“Yes, it’s a zombie story, but it’s also much more.  In Zombie, Ohio: A Tale of the Undead, there’s enough brain splatter to satisfy any genre purist, but this multileveled breakthrough novel by Scott Kenemore is also a love story, a murder mystery, and a comedy.” – Examiner.com

“Encompasses the best of everything that is good about zombie fiction.” – The Zombie Files

“What is first a very humorous take on the currently en vogue horror genre, maintaining a tongue-in-cheek comedic appeal throughout its narrative, Zombie, Ohio is an innovative look at the realm of existence and the nature of conscious reality.” – Moore Musings: A Library Blog

“. . .a brilliant collection of characters with a background story that will surely make you reconsider a zombie outbreak.”  – Sonar 4

“If you’re a zombie fan, you’re definitely going to want to get your hands on this one.” – Wag the Fox

“If Zombie, Ohio doesn’t get made into a movie soon the world has gone mad.” – Totally Jinxed

“Kenemore has created a fresh and inventive undead fantasy, but this is not just a zombie plague novel. It’s also a murder mystery, a love story, a coming of age (or stage) tale, and a second-chance memoir. You can’t ask for much more than that…” –Fang-tastic Fiction

“Check this one out as soon as you can. It might renew your faith in the zombie genre, and (dare I say it?), perhaps even in humanity.” – Pandora’s Pen

“Filled with a mix of deadpan humor, undead angst, and existential awakenings, Zombie, Ohio is a unique take on the zombie genre.” – S.G. Browne, author of Breathers.

“Zombie, Ohio by Scott Kenemore is a delicious slice of undead Americana.  Funny, tragic and nicely weird–it’s Monty Python meets Night of the Living Dead.  Definitely take a bite out of this one!”   – Jonathan Maberry, New York Times bestselling author of Rot & Ruin and Patient Zero

“Zombie, Ohio is a great zombie book, and I don’t even normally like zombie books.  It is zombies in the real world, if you can count academia as the real world.  But then, what counts as the real world is kind of the point.  In the pop-philosophical Peter Mellor we have, at last, the thinking man’s zombie, or the thinking zombie’s man, or maybe both.  Either way, Zombie, Ohio is the zombie thing that stands out from all the other zombie things, so much so that it is not really a zombie thing, even though it totally is, because there are a ton of zombies in it. It would also make a great movie, if by any chance you’re reading this jacket because you’re looking for a zombie thing to make into a movie.”  – Chris O. Cook, author of To Lose & To Pretend

“This story delves into questions of identity, purpose, and morality, without skimping on the requisite gore and action that zombie fans love. This will be one of the most unusual and satisfying zombie novels you read this year.” – Kim Paffenroth, Professor of Religious Studies and Bram Stoker Award-winning author of Gospel of the Living Dead and Valley of the Dead

BOOKLIST
December 15, 2010
Zombie, Ohio: A Tale of the Undead.
Kenemore, Scott (Author)
Feb 2011. 304 p. Skyhorse, paperback,   $16.95. (9781616082062).
George Romero, director of the original Night of the Living Dead and its sequels, should snap up the rights to this novel. It has everything: zombies, gore, brain-eating, love, death, even a murder mystery. All of it revolves around Peter Mellor, who wakes up after a car accident a little discombobulated. Even though the country is in the midst of a “zombie apocalypse,” it takes Peter a while to figure out that he is now one of the “moving cadavers” because, unlike your typical zombie, he can talk, reason, and, well, pass for human. As he’s trying to come to terms with his new undead state, reunite with his girlfriend, and figure out who was responsible for his car accident, Peter winds up the leader of a zombie horde and the target of human rednecks and intense military scrutiny. Kenemore, author of the humor books The Zen of Zombie (2007) and Z.E.O. (2009), combines humor with horror in a way that is guaranteed to make any zombie fan stand up and shout, “Braaaaaains!”
— David Pitt

“Kenemore’s debut is a darkly humorous depiction of one zombie’s struggle for enlightenment and redemption. When college professor Paul Mellor recovers consciousness near the wreck of his car, he finds himself in an apocalyptic landscape populated by desperate survivors and the walking and hungry undead. Soon Paul discovers that he is a zombie himself, albeit an unusually intelligent one, and that the crash that killed him was orchestrated. Determined to track down his murderer while dodging resentful breathers, Mellor struggles against his yearning to eat the brains of the living. His lapses are epic, even for a zombie, but nothing compared to the excesses of the living who see the apocalypse as license to indulge their worst impulses. There’s plenty to satisfy zombie fans who’ve come to expect some philosophy with their gore. (Feb.)”