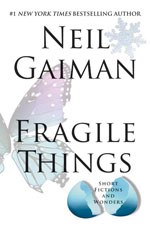 …may well be Neil Gaiman’s “Bitter Grounds” in his 2006 collection Fragile Things, which I have just started reading.

I was totally floored by this tale of contemporary Voodoo zombies in New Orleans.  It is scary, surprising, and delightful.  (Coffee is involved too, so the title becomes a pun on coffee-grounds and the ground in which a zombie is buried.  [I like puns!])  “Bitter Grounds” also shows that the classical Haitian-style zombie genre is still alive (or, perhaps, “alive”) despite the meteoric rise of the brain-eating, Romero zombie.    I strongly recommend checking out this story if you’re a zombie fan!

An Aside: I like Gaiman a lot, but am well aware I’m coming to him late.  When I was in college in the late 1990’s, I was a “horror-guy,” reading Lovecraft, Straub, Poe, King, and Campbell for pleasure.  When I met Gaiman fans– there were several in my first-year dormitory– they seemed not to be “horror guys/gals” at all, but rather “fantasy guys/gals.”   They collected comics, watched Japanese animation, and played role playing games.  (Also, they all listened to Tori Amos… whereas I much preferred punk rock [and still do].)  Based on this first impression of the Gaiman-loving neighbors assigned me by the housing office, I decided, sight-unseen, that I was not a Gaiman fan because his followers were so unlike me.  I never cracked one of his books or opened one of his comics.

Then, a few years ago, I read a short story by Gaiman called “A Study in Emerald” and was totally bowled-over.  Not only was this guy clever and funny and scary, he was clearly a faithful student of H.P. Lovecraft (and Conan Doyle to boot)!  Gaiman may be a “fantasy guy,” but he is also concurrently a “horror guy” of the highest caliber.

Now, I am slowly trying to read all of his books.