For the last couple of weeks, I’ve been working my way through The Damnation Game, a 1985 novel by Clive Barker. 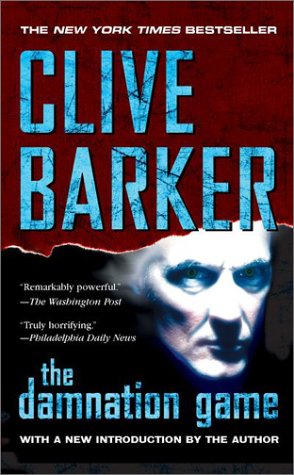 I’m enjoying the book very much.  It’s not about zombies, but rather about a gambling addict who is taken into the employ of another mysterious gambling addict who may have supernatural powers.  And while I say “it’s not about zombies,” I’m moved to write about it here because there are so many effective scary scenes involving reanimated corpses… that aren’t quite zombies.  These corpses don’t want to eat people’s brains, but they do do horrifying things.  In a way, being horrifying seems to be their purpose.   If a traditional zombie (that is intentionally animated) is created to attack or eat you, the villian of The Damnation Game reanimates his corpses to fool people and to horrify them.  Thus, I wouldn’t call these walking corpses from The Damnation Game “zombies”, but they’re definitely “zomb-ish.”

Many of my favorite horror and science fiction writers do this–creating or using creatures that are like zombies, but not zombies.  Works by Stephen King and Tim Powers come immediately to mind, but there are others:

I’m not going to try to list all of them–that would be too large a project.  But if you like variations on the zombie theme, I can recommend The Damnation Game.

One thought on ““Zomb-ish” reanimated corpses in The Damnation Game”