Kotaku.com reports that zombie actors and real U.S. soldiers will be on hand at a Pennsylvania Best Buy next month for the launch of Resident Evil 5.  If it’s an authentic report, it sounds like the event has the potential to be pretty cool.  Most folks I know who serve in the U.S. armed services love zombies and video games, and would be delighted to appear at something like this.

Resident Evil 5 was in the news a while back amidst accusation of racism.  Apparently, it’s set in Africa, and involves white protagonists fighting African zombies who have dark skin.  After a preview of the game was shown–and complaints of racism lodged–Capcom went back and inserted white zombies amidst the black ones.  That’s what I heard anyway.  (I haven’t seen the final cut of the game.)

Here’s one of the screenshots available online: 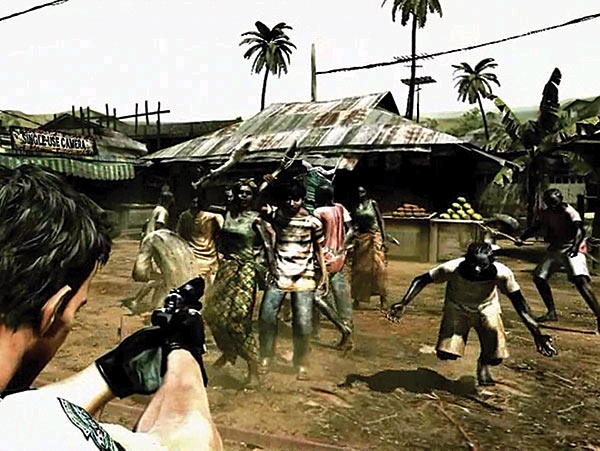 I like to think of zombies as post-race.  David Cross has an awesome comedy bit on his album It’s Not Funny about that.  He talks about how you can still find segregated graveyards in the American South, and he wonders, when they rise from the dead, if the zombies would still be racist.  Like, even though they’re all just rags and bones, would they still be like: “Okay, let’s go eat people’s brains…  But wait a minute…. Were you white?  No?  Then you can’t come.”  (Trust me, it’s funny when David Cross does it.)

I think Resident Evil 5 brings to the fore the question: Are we’re ready, as a society, to accept popular entertainment in which the hero is white and the villain is black, but it has nothing to do with race?  I can’t think of too many Hollywood movies that have a white hero and a black villain.  There’s Demolition Man.  There’s Candyman.  Maybe Lakeview Terrace counts.  (I didn’t see it.)  But I have to think hard to come up with these.

I strongly suspect that Resident Evil 5 is not racist, but for some people it may be dangerously cutting-edge in its sensibility that “sometimes the good guys are white and the bad guys happen to be black, and it has nothing to do with their races.”

One thought on “Resident Evil 5”