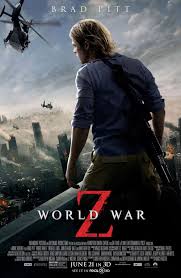 Brad Pitt’s World War Z is an adaptation of the Max Brooks novel of the same name in the sense that a Japanese speed metal band’s cover of the first 20 seconds of “Should I Stay Or Should I Go?” is an “adaptation” of Combat Rock.

Also, I liked it.

In no specific order, here are my thoughts and reactions:

In conclusion, if you like dark zombie fiction you owe it to yourself to see this film.  It avoids the pitfalls that plague so many works of zombie art.  It never overexplains or underexplains.  Brad Pitt does a very good job with the lines he is given.  (And ALMOST makes the 1990’s grunge band haircut work.)  The supporting performances are likewise solid.  The film does not insult you with a saccharine ending.  It does much very, very right.

And it is, of course, only the first attempt at a cinematic interpretation of Max Brooks.  I daresay that if we are lucky, and if the good box office numbers hold, there may yet be others to which we can look forward…