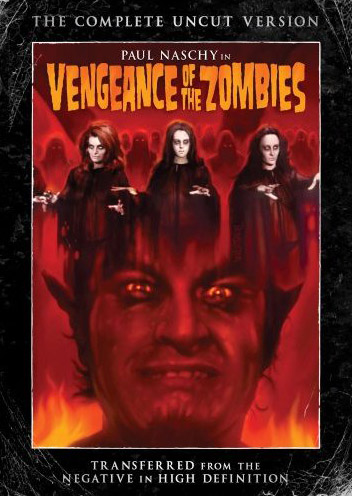 Vengeance of the Zombies is a 1972 Spanish zombie film shot in England and Spain, starring Paul Naschy.  Vengeance tells the story of a mysterious cloaked figure who roams the streets of London after dark, reanimating corpses with Voodoo and using them to commit murders.  An obscure film even by the standards of the cult horror community, it has only just been made available through Netflix.

And it’s terrible.  Sometimes so bad that it’s funny, but more frequently so bad that you are just bored.  It’s a terrible, terrible zombie film.

Shot in Spanish with English subtitles, Vengeance is not poorly plotted, but the execution of that plot is unpardonably bad.  The pacing is slow and boring.  The zombies look cartoonish.  The fake blood looks…well, fake.  The acting is wooden, and the fight scenes are absolutely terrible.  (Think Adam West’s Batman, but without the BIFF! BOOM! POW!.)  The scenes at “night” are too well lit.  (As are the scenes during the day, come to think of it.  And a “black mass”—in which the Devil himself appears—suffers from being lit like an operating room during surgery.  [Rent the thing if you think I am exaggerating.])

Also strikingly terrible is the soundtrack.  Rather than spooky music that builds tension and makes you feel more scared, we are treated to a groovy jazz soundtrack—loud, upbeat, and heavy on the horns.  It doesn’t fit the movie at all!  The effect of this frenetic  jazz upon a scene in which someone is, say, being strangled by a zombie is jarring to say the least.  (I actually found this horrible music the most intriguing aspect of Vengeance’s awfulness.  I mean, the other shortcoming of the film are at least explainable.  You can blame them on inexperience and incompetence.  Like, I understood what the filmmakers were going for, they just didn’t know how moviemaking worked so it came out bad. However, having non-scary, non-scene-appropriate jazz EVERYWHERE just confuses me.  It’s not a mistake.  They did this intentionally.  Why?  Were they trying to make a “groovy” zombie film?  Did they want you to leave the theater and say to your friend, “Wow, that part where the zombie strangled that screaming girl was really…groovy”?  I don’t know.  The 1970’s were a confusing time.  I think trying too hard to be “hip” in the 70’s, and failing, apparently resulted in films like this.  [Then as now, hipsters were annoying.  And hipsters who were bad at being hip were somehow the most annoying of all.])

There’s softcore nudity throughout Vengeance, and a real chicken is actually killed for a “blood ritual” scene… which just made me feel sad.  I felt bad that both actresses’ modesty and a chicken-life were sacrificed in the making of this nonsense.  What a waste.  (I hope they at least ate the chicken.)

In conclusion, it is almost unbelievable that this movie could come from the same zombie filmmaking tradition that would one day bring us such transcendent works of art as [rec] and [rec 2].  However, the fact that it took Spanish zombie films 35 years to recover from an atrocity like Vengeance is not surprising.  I’m only relieved it did not expunge all attempts at the genre forevermore.