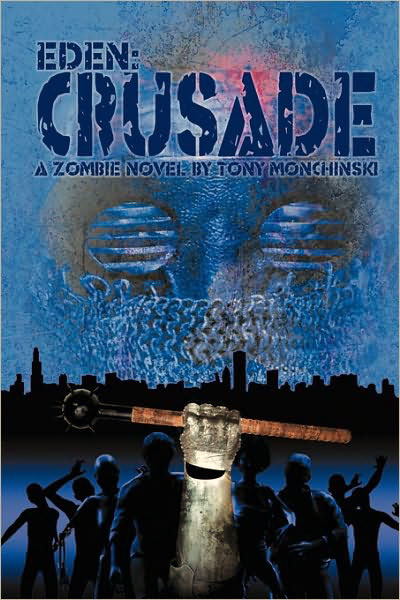 What allows an audience to relate to a protagonist?

This, for me, was the central question raised by Tony Monchinski’s new zombie novel Eden: Crusade ($14.95, Permuted Press).

Many zombie novels (and horror/adventure tales) operate on the mechanism of creating likable characters and putting them into danger.  (The more elaborate and interesting the danger, the better!)  But it’s important that, as readers, we give a damn about the protagonist.  If he/she might get eaten by a zombie, we need to be invested in him/her.  There needs to be a reason why we don’t want that to happen.

And yet Bear, the protagonist who must navigate the harrowing zombie apocalypse wasteland of Eden: Crusade, is not presented as “likable” in the traditional sense.  His foibles and neuroses are nonexistent.  His metaphysical doubts are unknown to us.  Instead, Bear is hewn from the rock of our most ancient narrative traditions.  To find a similar protagonist, one must go back centuries to the Volsungasaga, Le Morte d’Arthur, or, indeed, to Beowulf itself.  Like Sigurd or Beowulf, Bear endears himself to the reader only through his actions.  He is not witty.  We don’t like him for his personality.  He does not have failings or amusing traits to which we can relate.  Instead, Bear is a force to be reckoned with.  No more and no less.  He is resistance incarnate.  His implacable determination to survive (and kill zombies) is his defining feature.

I am, perhaps, also moved to invoke ancient sagas because of Eden: Crusade’s propensity for elevated, archaic, and hyperspecific language relating to weapons and armor.  For example, on the book’s first page alone–as Monchinski limns the physical form of his protagonist–we encounter “brume,” “aventail,” “atavism,” and “bymie.”  (I had to stop and look up all but one of those.  [I’ll let you guess which one.])  Whether or not dipping into the antedeluvian lexicon makes this zombie novel more enjoyable may be an open matter, but any reader should be ready for it if they buy this book.  The narrative style is certainly distinctive.

And, who knows, you may even find yourself relating to him a little by the end of it.