Last week I watched the 2007 zombie comedy The Mad.  It’s a frustrating film to review or summarize because it’s so 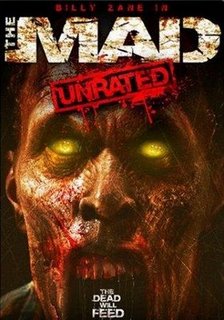 uneven.  There are a few awesome, hilarious scenes that are right up there with the funniest moments in Shaun of the Dead.  But there are also sequences of banal aimlessness, terrible puns that misfire utterly, and poorly thought-out plot sequences.  In the end, I guess I would guardedly recommend this film.  However, you’ve got to be prepared to take the lousy with the good.

The Mad (a reference to/pun on Bovine Spongiform Encephalopathy), is the story of a doctor and former drummer (played by Billy Zane) who is on a vacation in the country with his girlfriend, teenage daughter, and teenage daughter’s teenage boyfriend.  The group makes the unfortunate decision to stop for the night in a quaint village where a shipment of contaminated meat has just arrived.  Those who consume hamburgers made from the meat are turned into bloodthirsty zombies.

The tension in the film (at least initially) comes from the conflicts between these four characters.  The doctor/drummer is having doubts about his girlfriend, and is constantly bickering with his daughter.  The daughter hates the girlfriend, and hates being treated like a child.  The girlfriend wants to insinuate herself into the family as a stepmother.  And the boyfriend just wants to get laid.

I commented in a previous blog post that Robert Kirkman’s zombie comic The Walking Dead made me think about whether zombie outbreaks would curtail or encourage romantic liaisons.  The Mad seems to want to opine similarly on the question of family togetherness.  When a family is struggling, will a zombie outbreak send it careening toward complete dysfunction, or will it help the family resolve differences and become closer than ever?  (The answer, at least in The Mad, is a combination of the two…)

Parts of The Mad are very, very funny.  The comedy chemistry between Zane and Maggie Castle (who plays his daughter) is awesome.  A scene in which they discuss the distance that has grown between them while killing zombies in a field is probably the highlight of the film.  Other scenes–such as a discussion of what qualifies as a “zombie”, and a sequence in which Castle’s character flirts with a farmer–are also funny and effective.

Unfortunately, much of the rest of the film is uneven.  The editing is awkward, and the pacing feels off.  Many of the jokes are just shticky puns or tasteless groaners.  The zombies look okay, but are nothing to write home about.  And a scene in which the main characters band together to fight a mutant hamburger patty just did not work for me.

In summary, this film is all over the place.  But darn it, I think the good parts redeem it.