This is not my ranking of the most culturally important zombie movies of all time.  (That list would be harder to compose, and would likely begin with Night of the Living Dead, Dawn of the Dead, Return of the Living Dead, and White Zombie.)  Instead, it is a personal ranking of the zombie films that give me the greatest pleasure when I watch them.

This is the film that made me fall in love with zombies.  A supremely effective horror comedy, Return of the Living Dead follows a group of punk-rock teenagers, warehouse workers, and a mortician on the night when a secret government zombie-creating chemical is accidentally leaked from a storehouse.  Canonically important as the first movie to establish that zombies want to eat brains, Return of the Living Dead masterfully mixes gore, comedy, sex, horror, and action.  The characters are wonderfully rendered by an outstanding cast.  (James Karen’s performance as the warehouse supervisor is my favorite.)  And the zombies look wonderful.  Just the right mix of scary and funny.  It also features the iconic Tarman Zombie.

Dawn of the Dead is my favorite George Romero movie.  In his review (written when I was about 2 years old) Roger Ebert calls it “one of the best horror films ever made.”  I strongly agree.

In addition to having awesome, scary, and humorous zombies, I love the way that Dawn of the Dead powerfully confronts racism, sexism, and class discrimination in such a brutal and vivid way.  Dawn of the Dead pushes all of the buttons of a Todd Solondz film, but without being twee or hipster-ironic about it. Romero is dead serious.  Full stop.

Dawn of Dead shows us a world in crisis, where all of our best—and worst—traits are pushed to the fore.  The opening of the film shows racist white policemen leaving poor black citizens to die in inner-city slums.  As the zombie-infested world becomes increasingly lawless, humans form violent criminal gangs and hunt each other.  Again to Ebert, who puts it thusly: “The zombies in Dawn of the Dead are not the ones who are depraved.  They are only acting according to their natures […] The depravity is in the healthy survivors.” Yet despite a world of prejudice and cruelty, later in the work we see survivors breaking all barriers of class, sex, and race to live together peacefully (albeit in a shopping mall surrounded by zombies).

Dawn of the Dead is a work of breathtaking brilliance because it forces us to ask: If the dead became murderous undead cannibals, then what would we become?

Who doesn’t like Shaun of the Dead?  That’s like not liking puppies or Christopher Walken or something.  This film is great because it works on so many levels.  Veteran zombie-fans appreciate the satire of the genre, and Simon Pegg or British Comedy fans can use it to discover the appeal of zombie films.  Often imitated but never duplicated, this film is hilarious and awesome.  Enough said.

Featuring delightful cameos from some of the stars of the original, the remade Dawn of the Dead is a variation on the theme of the first film.  Highlights for me include the opening scenes of panic and madness as zombies overtake suburbia, and the scenes of innovative long-distance communication between the humans holding out at the mall and another human holding out on the rooftop of a gun store.  The remake has many more action-sequences than the original, but also manages to capture much of the human drama that made the first one so good. 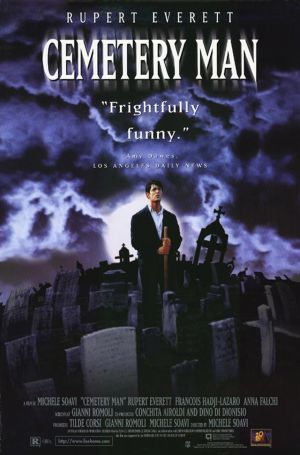 I didn’t watch this film until last year, and have already written a pretty extensive review of it.  Suffice to say, it is the most European-feeling zombie film I have ever viewed.  There is moral and spiritual ambiguity at every turn.  (The “good vs. evil” and “us vs. them” paradigm of so many American horror films is not really in play.)  Cemetery Man is wonderful because it uses this unconventional footing to create a captivating, magical, and sensual world… that is, you know, filled with zombies.

I have always loved this film.  It is an eerie meditation on Voodoo and the “classical” Voodoo-zombie.  Some of the scariest parts are the dream sequences.  (My favorite is when Bill Pullman’s character walks past a jail-door where arms reach out to grab him, but miss because he is too far away.  Then, the arms magically extend to like 12-feet long to gasp him.  Crazy.)

All James Karen, all the time.  That would be my dream, anyway.  This film comes as close to it as anything ever will.  It’s got great looking zombies, and people (especially people portrayed by James Karen) reacting to them in hilarious ways.  It features an appearance by the Tarman Zombie from the first Return of the Living Dead, and also several new zombies who are memorable, distinctive and funny.  It’s also one of the only zombie films I can think of that features a kid as the main character.  Light-hearted and clever, Return of the Living Dead Part II is a real gem, and still unknown to far too many zombie fans.

I’ve met some zombie fans who call Land of the Dead Romero’s “Hollywood sellout” movie, and his biggest mistake.  I’ve heard others call it the apex of his career and the utter actualization of his artistic vision.  As for me, when I watch this film, I am entranced by its capability to expand upon the zombie-world hinted at in Dawn of the Dead, especially regarding themes of social justice.  In the world of the film, human society has tried to carve a niche for itself in the zombie-infested wasteland.  Though there has been some success, class differences are still paramount.  I think Dennis Hopper’s character is wonderful as the mayor of the dystopia and ruler of the aptly-named Fiddler’s Green, a zombie-free housing development for the rich.  John Leguizamo and Asia Argento are great, and there’s a wonderful cameo by a zombified Simon Pegg.  I always enjoy seeing this film.

This is another one I watched and reviewed recently.  It’s on my list because I love its rendering of “classical” zombies, I love the setting (in 19th century England), and I love the acting (and, in some cases, overacting).  Also, unlike in many of its films, Hammer doesn’t have to overextend itself to portray zombies.  (With many Hammer films from the 60’s, I watch them and think: “Gee this is well-acted, well scripted, and it’s a good idea for a scary story.  If only they’d also had the special effects budget to depict vampires/dinosaurs/lizard-men/werewolves/Frankenstein’s monster effectively.”  This film avoids that problem, showing that you don’t need a big Hollywood studio effects budget to make awesome-looking zombies.)

Whenever people ask me about my favorite zombie-fighting scenes, I always go to Zombi 2.  There is, simply put, so much here to love.

This film is not perfect—some of the acting is uneven, and there are a few tedious sequences that make the film drag.  But overall, I think this film is great to watch, and easily strong enough to round out my Top-10.

Final Thought: Television is ever-becoming increasingly legitimate as a vehicle for serious art.  Dramas like the Sopranos and the Wire attest to this fact.  In this connection, I would also like to give a nod to Joe Dante’s “Homecoming” episode of the Showtime Masters of Horror television program.  It was the best use of zombies as a tool for political satire ever, and still managed to be scary while comporting a political message.  The only reason it’s not on my list is that it’s technically a TV show episode, and not a film.  Whether or not you agree with its portrayal of ’00’s-era Republicans, it is hard not to feel that “Homecoming” is an envelope-pushing, game-changing piece of art.